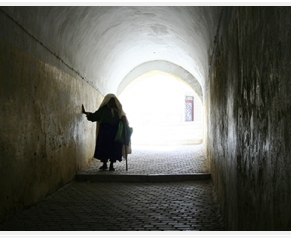 Shaykh Amin reads from chapters of The Book of Aphorisms, by the renowned scholar Ibn ‘Ata Illah.

Ibn ‘Ata’ Illah’s Book of Aphorisms (al-Hikam al-’Ata’iyya) is one of his most well-known works. Being one of his earlier compositions, it comprises what is contained in the lengthier and shorter works of the Sufis with greater clarity and concision. Commentators have mentioned that the Hikam comprises four sciences of Sufism: the science of admonition and reminding, purifying spiritual works and acquiring the inner virtues, realization of spiritual states (ahwal) and stations (maqamat) and knowledge bestowed from the Divine Presence.

It is clear from the Hikam that Ibn ‘Ata’ Illah is writing as a master of the spiritual path and he intends his book to serve as a guide for the aspirant (murid) who is travelling along the path. The order of each aphorism is central in this regard and reflects Ibn ‘Ata’ Illah’s role as a true educator. Despite that, Muttaqi al-Hindi (d. 977 A.H.) has rearranged the aphorisms according to topics which is useful for other purposes. His edition of the Hikam can be easily found in the Muslim world.

The Hikam has received numerous commentaries; a sign that this work has been well-received by the community of scholars and spiritual luminaries. To date, it has received at least thirty-three full commentaries and has been put in verse in over eight different versions. In some turuq, the commentary by Ibn ‘Abbad al-Rundi was taught to the novice, and the commentary of Ibn ‘Ajiba was taught to the more accomplished disciples. More recently, Dr. Ramadan Buti has published, in five volumes, his commentary on the Book of Aphorisms that he delivered in numerous mosques in Damascus since 1974.

Session 1
Shaykh Mohammed Amin Kholwadia introduces the work of the great Imam, and then provides an exposition of the first aphorism.

Session 2
This session covers aphorisms 3, 4 and 5. Destiny, contentment, faith in Allah as the Supreme Sustainer, and the folly in being excessive in planning our lives are at the center of discussion in this session.

Session 3
In this session, Shaykh Amin discusses the 7th, 9h, and 10 aphorisms. Do not despair when things do no go as planned or happen in time. The wisdom of Allah (S) encompasses all things. The best act is the act that contains the form and the spirit. There is great folly in over-emphasizing one over the other. An act without spirit is deficient, and an act without form cannot imbibe spirit. The five pillars of Islam provide a full and wholesome spectrum of ‘ibaadaat, and the realization of this reality should leave no room for apathy on the part of the worshipper.

Session 4
Bury your existence in the earth of obscurity. If something sprouts before it is buried, its fruits will never ripen. At the root of this hikmah is the saying ‘Anyone who seeks glory is not a leader’. Pride and arrogance do not go with the properties of the earth. The dunya precludes you from understanding you. Wise old maxim: whoever knows himself knows his Lord. The inspiring story of Sultan Ibrahim Adham is related to make several points.

Session 5
We regret that a portion of this recording was lost due to a technical snag. Hikam 15, 17 and 25 were discussed in this session. A synopses follows. Allah’s (S) existence is necessary while the existence of creation is merely out of possibility. Hence Allah (S) overwhelms his servants with his dominance over all things. It is in knowing how imperfect we are that our servitude to Him lies. Be happy with the state that Allah puts you in. Do not be ungrateful by asking to be put in a different state. Thank Allah and ask Him to give you barakah in whatever state you find yourself in. Allah (S) will make it easy for you if you work to please Him. The will of the slave must coincide with the will of Allah.

Session 6
This session covers aphorisms 26, 27 and 28. The sincere seeker is aware that the closer he gets to Allah (S), the closer he wants to get to Him. At all times, we are exhorted to respect the means that bring about our guidance. A firm footing in ‘aqidah is a pre-requisite to all other knowledge.

Session 7
In this session, Shaykh Amin discusses aphorisms 30, 31 and 32. The take-away points in this session include the following. When you are with Allah, you become generous in nature. Guidance must always be sought through essential nur, not nur that is naar-based (fire-based). And finally, the one that overlooks the blemishes in one’s own self while finding fault in the world around him is on a path of loss.

Session 8
Aphorisms 34, 36, 39. The first step to getting closer to Allah (S) is getting closer to those who are close to Him, namely the angels. We must work to rid ourselves of our human deficiencies in order to be attractive to angelic company. Committing sins causes the angels to distance themselves from us and the vacuum left is filled by demonic agents. Physical and spiritual hygiene are essential attributes for closeness to angels.

Session 9
Aphorisms 41, 42 and 43. To flee from the inevitable only to pursue something that will not last is a sign of hearts that are blind, and is a folly that the human being is prone to. Hijrah is for Allah (S) and Allah (S) alone. It is imperative that the seeker not pollute his intentions with the worldy, for such actions will have a diminished impact on the heart of those who perform them. We must always keep the company of those whose destination is Allah (S) so as to ensure that we are also aligned to travel towards the same destination.

Session 10
Aphorisms 45 through 49. The few good deeds of a good Muslim who has removed from himself all forms of desire and worldliness are greater in the sight of Allah than the numerous good deeds of one who is still given to the cravings of his self. Good deeds are usually the results of good states. When we do something, we are encouraged to do it well. And a good state comes from a person developing the ability to receive the fadl of Allah.

Session 11
Aphorism 50. It is against the etiquette of being a seeker to diminish the despicability of minor sins. Against the limitless justice of Allah (S), even minor sins could become major. The saalik is always cognizant of his deficiencies and is a constantly in a state of turning to Allah in the hope of being forgiven.

Session 12
Aphorisms 56 through 59. Light is the army of the heart, and darkness that of the nafs. Allah (S) fortifies the servant he favors with His army of nur – of varying intensities.

Session 13
Aphorisms 60 and 61. The greedy and envious will always be debased. Nothing drives man to insanity more than wahm (i.e. a delusion)

Session 14
Aphorisms 62 through 64. Letting go of vain hopes and desires liberates the seeker. The seeker must be aware of the folly of being overly attached to the means, and should focus his time and effort on the end, that is, building his relationship with Allah (S).

Session 15
Aphorisms 67, 70, 71. Shaykh Amin examines the hikam that warns of the folly in deprecating the worth of those who observe their awrad but appear to not have a strong spiritual presence. The sign of an ignorant person is that he answers all that he is asked remembers all that he knows and interprets all that he sees. The session ends with a high note on the hikam that talks of the unlimited generosity of Allah (S), and His wisdom in reserving His servants’ rewards for the hereafter.

Session 16
Aphorisms 72 through 77. The seeker must draw encouragement and energy from the acquisition of immediate rewards to his labors. The believer can ascertain if he is moving forward towards this destination or backwards by examining where he stands at any given time with respect to his past condition.

Session 17
Aphorisms 78, 79, 81. We must never undermine the Lordliness of Allah (S) by becoming apathetic to our conditions. Tarbiyyah goes hand-in-hand with Ruboobiyyah. Allah’s (S) supreme Oneness is manifested in His attributes – the majestic and the beautiful ones. Our awareness of His oneness is what helps us recognize that it is He who brings us strife and He who gives relief.

Session 18
Aphorisms 86 through 93. One of the greatest forms of deprivation is to be deprived of seeking assistance from Allah (S). Success for the seeker is not a measure of worldly good; rather it lies in the constant, unwavering recognition that the worldly states are by the will of Allah (S). The seeker is always pleased with what his Lord decrees for him.

Session 19
Aphorisms 94 through 98. Deprivation hurts you only because of the lack of your understanding of Allah in it. Sometimes Allah opens the door of obedience to the slave, but not the door of acceptance; or sometimes He condemns you to sin and it turns out to be a cause of arriving at Him. A disobedience that bequeaths humiliation and extreme need is better than an obedience that bequeaths self-infatuation and pride. There are two graces from which no being can be separated, and that are inevitable for every creature: the grace of existence, and the grace of sustenance. He bestowed His grace upon you, first, through giving you being, and, second, through uninterrupted sustenance.

Session 20
Aphorisms, 111 through 115. Gaining nearness to Allah (S), and receiving from His bounties, is paradoxical in that it requires letting go of one’s yearnings with sincerity. Boredom is from heedlessness, and heedlessness is a state of complete deprivation.

Session 21
Aphorisms, 103 through 105. The ‘aarif is always cautious of his security and stability because he is acutely aware that Allah (S) manifests His attributes (the Beautiful and the Majestic) differently every single day.

Session 22
Aphorisms 131 through 134. The ultimate mercy of Allah is that He veils the deficiencies of His slaves with a good exterior. The conscious seeker is aware of this mercy at all times and uses it as a means of gaining closeness to His Lord.

Session 23
Aphorisms 119 and 120. This session delves into a discussion of the significance of the ritual prayer and the doors of barakah it opens for the seeker.

Session 24
Aphorisms 121 and 122. The seeker must always be aware that his every act of worship only comes about by the mercy and will of Allah (S). It is folly to barter acts of dedication for reward from Allah (S) when the former is itself rooted in Allah’s mercy and creativity.