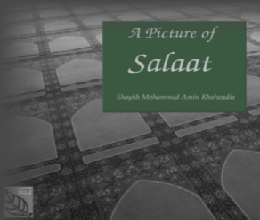 In this moving lecture originally delivered in 2006, Shaykh Amin shares a powerful metaphor for Salaat. The talk begins with a reminder of the general prohibition around the crafting of sculptures and images of the living in Islam. In every command Allah (S) issues to his slaves, He exhorts them to take it to completion. It is for this very reason that the artist or sculptor who engages in carving out images of the living will be asked to bring his “creation” to life. Shaykh Amin gradually extends the concept to a believer’s offerings of salaat. By fulfilling the mechanics of the prayer, a believer has essentially drawn a picture of it. But every command must be taken to its completion, and so must salaat be given its life. Herein in lies the message in this motivating lecture.